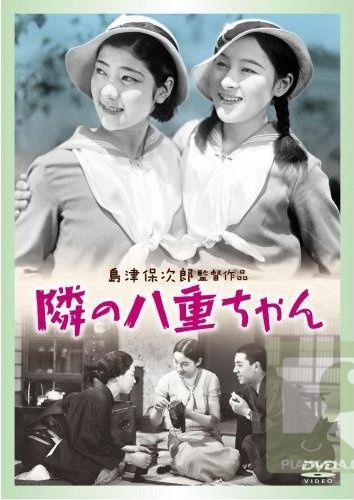 From the seemingly effortless opening tracking shot through a middle-class neighborhood that terminates to a shot of two young men practicing baseball pitches in the backyard of their suburban home (and accidentally breaking the window of a neighbor's home), Yasujiro Shimazu illustrates his remarkable agility with the medium in the sublime shomin-geki (home drama), Our Neighbor Miss Yae. Ostensibly chronicling the story of a budding affection for the girl next door, Yaeko (Yumeko Aizome), the film is also a complexly (but gracefully) choreographed portrait of contemporary 1930s Japan, as the two households broach an array of traditional and modern social realities from divorce and extramarital affairs, to a young woman's sexual forthrightness, independence, and virginity. Shimazu's elegant command of narrative and camera is bolstered by the equally strong, natural performances of the actors (most notably, the great character actress, Chouko Iida), resulting in a remarkably fluid and delightfully satisfying slice-of-life portrait of prewar Japan.

This will be the last Class Trip due to waning levels of interest. Still, I'd like to see a few people get involved for this one! This is only 76 minutes long and is available on YouTube:

...as well as on Karagarga. So you guys have no excuse!

Here's the other Class Trips:

I think I have this somewhere...
Please TRIP and Die
Top

So watch it by next weekend
Latest notable first-time viewings:

Might watch it.
"I thought, well, heaven, all that marble and giltwork, sounds a bit middle class. I would prefer something that was, I don't know, carpeted and had skirting boards, things like that." — Alan Moore

What happened to charu and Shield? They used to do these every time ;___;
Latest notable first-time viewings:

Aw. You know I always participate if I have time.

I'm in for this one, I promise.
New blog!

It's a little difficult fitting in films in addition to all the stuff I watch for the podcasts but I am going to try extra hard not to miss this one.
Podcasts: Cinema on the Road (Ep #29: CHENNAI EXPRESS et al) | They Shot Pictures (Eps #25 & 26:2013 In Review) (w/ roujin, fist & Sean) *NEW

I have no excuses.

Notes from Underpants.
"I thought, well, heaven, all that marble and giltwork, sounds a bit middle class. I would prefer something that was, I don't know, carpeted and had skirting boards, things like that." — Alan Moore

Will grab this when I get home!
“Bisogna essere molto forti per amare la solitudine.” - P.P. Pasolini

Who else saw this? Will write something on it later today. It's good
Latest notable first-time viewings:

I downloaded it
Please TRIP and Die
Top

This was lovely, richly produced for a shomin-geki of the 30s (in contrast to a lot of Naruse works of the time, for instance, which look like B-reels even if they aren't) and offering a carefully modulated crticisim of female social roles in Japan without turning the agents of these social structures into one-dimensional figures (in this way Shimazu can be an antecedent of the stuff Ozu would start making after the war). It isn't rigidly structured, though - it has this remarkable openness to play and banter and a freewheeling way of drifting between subjectivities and stories. Den Obinata and Yumeko Aizome are lovely in the leads; Obinata is a sexy motherfucker as was showcased the year prior in Passing Fancy. I watched the end in fragments because I got distracted, I regret it because I was actually very involved. The low-key ending, including both a parting and a reunion, sums up the motif of circularity in exchanges and subnarratives. Idk, dunno how to explain its qualities too well but it is a really gorgeous film and surprisingly dynamic, too, full of energetic cross-cutting between different viewpoints and angles to give a sense of holism in specific scenes, and some lovely if unshowy tracking shots.
Latest notable first-time viewings:

It is really short. Get the updated subs from the KG forums. It's on YouTube, too, but I haven't checked the subs there
Latest notable first-time viewings:

It is also refreshingly frank in how it covers its many subjects, and it is remarkably dense - for 75 minutes, there's a lot going on which keeps the whole thing consistently involving.
Latest notable first-time viewings:

That YouTube copy has no subtitles
( Criticker | Aphasic Odyssey )
Top

Then AntBar it and use the KG subs
Latest notable first-time viewings:

No. I watch things on my TV.

I'm going to DL it, but I can't guarantee I'll get to it today... lots of other stuff I want to watch
( Criticker | Aphasic Odyssey )
Top

Nope. The subs are there. Click on "captions" to turn them on.

I guarantee I'll watch this sometime this week, but I've been trying to get through a big backlog

Probably a good thing that this is the last one, either way
( Criticker | Aphasic Odyssey )
Top

A GOOD THING FOR YOU MAYBE
Latest notable first-time viewings:

Go on, give it a Yae
Latest notable first-time viewings:

this was wonderful
Please TRIP and Die
Top

Snapper: What do you think he was thinking when sitting out with the separated sister, thinking back on his conversation with her sister about how a woman should do what her husband says? Was it empathy, a change of mind on that matter? Or a reinforcement of how he felt the previous day? Obvs he remains of the mind that a "pure" woman is ideal, avoiding her advances on the beach.

Also, the thunder at the end! Ominous.

Japan was so Americanised at this time: baseball, Frederic March, Betty Boop, much deeper stirrings with female agency, and the film notes this. Indeed it drives the whole film.
Please TRIP and Die
Top

I think he was just weighing up his sisterly options. I think he becomes less of a douchebag after the conversation with the older sister but he's still got a lot of douchebaggery in him.

I like how all these characters have two sides, the charismatic older brother and the patriarchal douche, the sweet younger brother and the reactionary asshole, the sensible Yae and the emotional girl willing to leave her principles behind, the bossy, controlling father and the guy who gets drunk and bemoans the state of the company he's worked his life for, the victimised sister and the vamp. Nice development in everyone within 75 mins
Latest notable first-time viewings:

he was hotter in passing fancy though theres a whole scene where hes in the process of undoing his belt and hes looking down at us and its just yes please
Latest notable first-time viewings:

were you talking about him on the riverbank or when we hear the previous day's conversation repeated on the soundtrack?
Latest notable first-time viewings:

I thought it was him coming to terms with his feelings for Yae, an "I like a girl with spirit" sorta thing
Latest notable first-time viewings:

now that Trip liked it I guess everyone has an extra reason to watch this
Latest notable first-time viewings:

snapper wrote:now that Trip liked it I guess everyone has an extra reason to avoid this like the plague

Jedi go sleep with a hooker or whatever it is that italians are doing these days
Latest notable first-time viewings:

I thought this was a little awkward at first – that silly baseball practice, and why on earth did Keitaro act like an eight-year-old, rolling around on the floor (that picture Trip posted)? Was there no better way to show how comfortable they were in each other's houses? But once they all started acting their ages, and we had the two sisters for contrast, it became rather charming. The ending is perfect. And, yes, Den Obinata is a good-looking guy!


Trip wrote:What do you think he was thinking when sitting out with the separated sister, thinking back on his conversation with her sister about how a woman should do what her husband says? Was it empathy, a change of mind on that matter? Or a reinforcement of how he felt the previous day? Obvs he remains of the mind that a "pure" woman is ideal, avoiding her advances on the beach.

I think he's regretting his words/actions. I don't think he was ever quite as bad as that (it was a joke, with some truth in it, of course). But here he's feeling empathy for the sister, and women in general.

On the beach, he says he's looking for a "pure love" (not "woman"), which seems to make her happy. It gives her hope. But I think he was pretty turned off by her drunkenness the night before, and protected by his genuine preference for her more sensible sister.
New blog!

Trip wrote:Japan was so Americanised at this time: baseball, Frederic March, Betty Boop, much deeper stirrings with female agency, and the film notes this. Indeed it drives the whole film.

Yes, this was the main point for me. Not only do these external influences affect what the young characters do to pass the time, but also how they relate to one another and the older generation. It's perhaps the aspect that reminded me of Ozu and his later stuff, particularly Good Morning, with the lower middle-class families that still earn enough to provide such a noticeably westernised life for the kids, and live so close to one another. Beside this, there's not much in the way of social commentary. There's the odd, subtextual line about the current social or economic climate, but Shimazu seems more concerned with his narrative and his occasional long takes. Also, his close-ups. I love how the film begins with a close-up: that of the broken window after a stray baseball has punctured it. Literally, one family has shattered the peace of and intruded upon the other, which is really a neat abbreviation for the whole film.
“Bisogna essere molto forti per amare la solitudine.” - P.P. Pasolini

I think Obinata's floor-rolling antics, and the general childishness of the baseball-playing brother, is a way of showing a Western influence on behaviour - these are post-Restoration kids, they don't live according to custom (which obviously perturbs their parents - they pay very little heed to things like omiai as the sister shows) and this is reflected in their most basic behaviours - the little tics they do when they're bored, the looser, more playful, 'age-inappropriate' way they interact. Interesting to note that Obinata consistently wears a traditional school uniform which sort of shows that he's more behaviourally bound to the 'Japanese ways' of thinking but that he carries in him potential to go any which way - Yae is always in Western dress and is, fittingly, interested in exploring her options outside of the home. But interestingly, her runaway sister wears kimono the entire time IIRC. She's the one that did the traditional thing, found it unfulfilling and left it behind.
Latest notable first-time viewings:

And I liked the baseball game. The shot assembly is so energetic and it links the two households in a way that shows, with narrative economy, the essence of how they interact with each other but also represents the little notes of discord that they introduce into each others' lives.
Latest notable first-time viewings: