Discuss anything you want.
Post Reply
29 posts • Page 1 of 1

Corrie Class Trip is a project where we rotate the selection of a title for group watches on an appointed day/date to then discuss [previous iterations linked below]. We welcome all to participate and share their thoughts and feelings! The fifth viewing for Round 3 is scheduled for Saturday December 30th. Please post about the film itself and your experience with it in this thread, and any off-topic posts about the series itself in the Class Trip Discussion Thread. 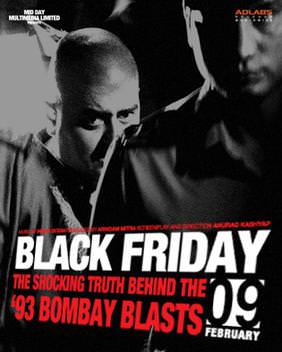 Wikipedia wrote: Black Friday is a 2004 Indian crime drama film written and directed by Anurag Kashyap based on Black Friday – The True Story of the Bombay Bomb Blasts, a book by Hussain Zaidi about the 1993 Bombay bombings. The film's creative consultant, Chandramohan Puppala, attempted to recreate those events and the intense feelings that followed them. It won the Grand Jury Prize at the Indian Film Festival of Los Angeles and was a nominee for the Best Film (Golden Leopard) award at the Locarno International Film Festival. The film was so controversial that the Indian Censor Board did not allow it to be released in India for three years and was finally released on 9 February 2007 after Supreme Court of India allowed it following the verdict in the '93 Bombay blast case was delivered by TADA court.

Huh. I thought this might be the Karloff/Lugosi crime drama. I'll see you on Saturday.
Top 30 Favorite Films of All Time
Top

I've got this exact movie poster...somewhere. It's probably why I think the same thing whenever I see that title.
Top

Rock wrote: I expect dozens of rolled up Carny posters.

I have them all folded up under my pillow, a hopeful peace offering to ward off the Gary Busey nightmares that sit on my face every night.
Top

A 30 year old bottle of Romilar? You've been holding out, crumb.
Top

Rock wrote:Sadly, Gary Busey is NOT in Black Friday.

Boo. You guys should have watched the Raoul Ruiz. Do any of you even know his work?
Top

I can't promise I'll have this within two days. but! I'm definitely in. especially since I've seen exactly zero Indian films from the last 40 or so years.
Top

Oxnard Montalvo wrote:I can't promise I'll have this within two days. but! I'm definitely in. especially since I've seen exactly zero Indian films from the last 40 or so years.

Someone needs to take a huge dose of this

ski petrol wrote:Boo. You guys should have watched the Raoul Ruiz. Do any of you even know his work?

The Ruiz didn't have Gary Busey either, so it's kind of a wash.
"We're outgunned and undermanned. But you know somethin'? We're gonna win. You know why? Superior attitude. Superior state of mind." - Mason Storm
____
Blog!
Top

crumbsroom wrote:
Someone needs to take a huge dose of this

This guy gets it.
"We're outgunned and undermanned. But you know somethin'? We're gonna win. You know why? Superior attitude. Superior state of mind." - Mason Storm
____
Blog!
Top

I actually just watched A Cat in the Brain and... it's probably good that I didn't make that the class trip.
"We're outgunned and undermanned. But you know somethin'? We're gonna win. You know why? Superior attitude. Superior state of mind." - Mason Storm
____
Blog!
Top

Interesting procedural, but way too long. It does have some really great sequences, like that one chase scene halfway through, where everyone keeps running until they are deadly tired.

But one of the most frustrating things about it is that even though the writing has a clear sense of drama, it pays very little attention to character development, so most roles don't feel very distinguished from each other.

The plot on the other hand, is so intricate and so specific, it got kind of hard to follow. But maybe I'm just too stupid.

I think the monochrome filters got a little annoying after a while too, even if I got what the director was going for with it.
Top

I didn't have a problem with the length or limited character development. The movie's pulling from stuff like Traffic (which is also where it gets the coloured filters, although it doesn't use them as effectively to delineate the story threads) and The Battle of Algiers in that it uses a less linear style to capture the scope and implications of its subject matter at the risk of making it harder to invest in individual characters. I did find the momentum of the investigation kept me involved and that the inspector and Badshah Khan provided effective human vantage points to the proceedings for me to invest in (and I appreciated that the movie didn't let either one off the hook, as it never shies away from the human cost of Badshah's actions and makes the inspector pretty unapologetic in his tactics). That being said, I was somewhat aware of the events and who Dawood Ibrahim and Tiger Memon were before watching the movie, so that may have helped me navigate the plot and characters a bit more easily.

I'd agree that the chase scene is a clear highlight, and I also liked the scene where the cops go to arrest the one guy in the john, who then tries to escape out the window only to be greeted by another cop standing right outside. Kashyap's very good at scenes like this that take scenes that would be thrilling in other movies and having them backfire humourously (Gangs of Wasseypur has an attempted hit that fails because the zip guns used by the assassins fall apart, and Satya, which he co-wrote but didn't direct, has a scene where two gangsters botch a getaway when their scooter falls over).

That being said, while I think this is a pretty effective film on the whole, this is one of Kashyap's earlier films and I don't think he'd really developed his voice yet. The thing with the filters feels like a steal from Traffic just because that film had them rather than an organic stylistic choice. Some of his later films have a more accomplished mixture of realism and artifice (there's a bit of that here, particularly the way he shoots Dawood Ibrahim) that I find more distinctive and appealing, even if they might be harder to apply respectfully to the more serious subject matter of this one.
"We're outgunned and undermanned. But you know somethin'? We're gonna win. You know why? Superior attitude. Superior state of mind." - Mason Storm
____
Blog!
Top

this is still on "Short Wait" in my queue but I'm still in. just waiting....
Top

Oxnard Montalvo wrote:this is still on "Short Wait" in my queue but I'm still in. just waiting....

or if I can get my friend's Netflix password I might be able to stream it this weekend.
Top

Oxnard, do you think you'll get to this soon? If not, do you mind if somebody starts the next round?

Slentert, do you want to do next round?
"We're outgunned and undermanned. But you know somethin'? We're gonna win. You know why? Superior attitude. Superior state of mind." - Mason Storm
____
Blog!
Top

yeah, I'm watching it tonight. sorry it has taken so gosh darn long but I know you are all a forgiving bunch (I hope).
Top

Oxnard Montalvo wrote:I know you are all a forgiving bunch (I hope).

Off with his head!

Rock wrote:Slentert, do you want to do next round?

I would be glad to.
Top

I had to do a bit of research at the end there, especially about Dawood Ibrahim, that the package of broken bangles was to guilt him into helping the Muslims take revenge i.e. the "sister's chastity". plus I guess since Dawood is connected to the Pakistani intelligence agency that ties into the belief that they had a hand in the bombings. so a lot of my viewing experience was just me taking in all the history - and maybe not completely, especially if some of the conjectures the movie makes are somewhat controversial. but I still appreciated its portray of violence as cyclical and stemming from loss and the very human desire for retribution (and not sadism or whatever reasons people think Muslims commit terror).
Top

Rock wrote:Slentert, do you want to do next round?

I would nominate these films if you don't mind.

Please tell me which one you guys would like to watch. I hope these are not too canon.
Top

welllll, if I had to be decisive it would be the Soderbergh since it is the easiest for me to get a hold of not-on-Youtube.
Top

Oxnard Montalvo wrote:welllll, if I had to be decisive it would be the Soderbergh since it is the easiest for me to get a hold of not-on-Youtube.