I'm honestly not sure if you should or you shouldn't.

That sounds like as good a recommendation as any. I'll probably stick with the "softcore" version, despite my preference for seeing the uncut versions most of the time, as I don't know if more explicit shots of rumpy pumpy (R.I.P. Roger Ebert) will actually add anything of value to the experience. Also, I think it's like three hours long already.
"We're outgunned and undermanned. But you know somethin'? We're gonna win. You know why? Superior attitude. Superior state of mind." - Mason Storm
____
Blog!
Top

I'd watch Caligula if it had a good cast/crew commentary.

Oxnard Montalvo wrote:I'd watch Caligula if it had a good cast/crew commentary.

Judge not that ye not be judged.

I think there's a commentary with Mirren on one of the releases. She seems to be the only person not embarrassed by the affair from what I know.
"We're outgunned and undermanned. But you know somethin'? We're gonna win. You know why? Superior attitude. Superior state of mind." - Mason Storm
____
Blog!
Top

that one really hits me where I live, oof.

I hope Noriega's got the BBQ ready.
Top

Hey, I heard that Dubya's dad died a few days ago. Is this true?
Top

Former pro wrestler Dynamite Kid, one of The British Bulldogs, dies at 60.

boojiboyhowdy wrote:Former pro wrestler Dynamite Kid, one of The British Bulldogs, dies at 60.


I was a huge fan of his as a kid. Best snap suplex I ever saw.
Ain't no grave gonna hold this body down

I loved her in The Outlaw Josey Wales; RIP

I was a huge fan of his as a kid. Best snap suplex I ever saw.

Donald Moffat - dead at age 87 due to complications of a stroke.

Veteran actor born in England, but lived in the United States most of his life. Moffat was a prolific stage actor, having been nominated for Tony and Drama Desk awards. His television appearances included The Chisholms, The New Land, Logan's Run, The West Wing and Dr. Quinn Medicine Woman. Moffat's most well known roles were as Lyndon B. Johnson in The Right Stuff and as base commander Garry in The Thing.

I'd rather not spend the rest of winter TIED TO THIS FUCKING CHAIR!!!

everything that I've read about LBJ suggests that his portrayal in The Right Stuff was 100% on the money.
Top

R.I.P. He always made me laugh.
I had no idea he was Albert Brooks' older brother until now.
Last Great Movie Seen
Upgrade (Whannell, 2018)
Top

See ya around, Dave.

R.I.P Mr. Einstein. I knew his name wasn't Dave Osbourne but I had no idea it was Einstein and that he was related to Albert Brooks. "Help me putz" is part of my lexicon thanks to Super Dave.
Top

Check out some of Super Dave's appearances on Letterman. He has one the meanest dead-pan's in the business.

Deadline wrote:Al Reinert, who covered NASA for the Houston Chronicle and went on to co-write the screenplay for Apollo 13 which earned him an Oscar nomination, has died. He was 71. Reinert died New Year’s Eve of complications of cancer at his home in Wimberley, Texas, the Houston Chronicle reported.

Reinert began his career as a crime reporter for the Chronicle, then moved into covering NASA in the 1970s where he discovered his love and fascination for space. He directed the 1989 documentary film For All Mankind, which earned him his first Oscar nomination for best documentary feature. The film concentrates on the beauty of the Earth as seen from space, along with interviews with Apollo crew members and mission control staff played over original mission footage.

Reinert told the Houston Chronicle in a 2015 interview that he didn’t want For All Mankind to be a traditional documentary with talking heads.

“Tom Hanks told me it’s not a documentary,” he said. “He said it’s an art film. And in a way he’s right. I didn’t know any better at the time. I’d seen films with astronauts talking, and they just didn’t do anything for me.”

Reinert wanted to interview astronauts about a mission that had been long enough in their past, that they had time to reflect on their experiences.

“Think about a long drive,” he said, according to the Chronicle. “You’re checking your speed, your gas, traffic, all these things around you. When you get back weeks later, then you really can process and articulate what you thought about the Grand Canyon.”

In 1996, Reinert was nominated for a second Oscar for co-penning the screenplay for Apollo 13 with William Broyles Jr. He also co-wrote the 2001 film Final Fantasy: The Spirits Within, worked on Armageddon, as well as an unproduced James Cameron film about Mars.

Reinert also wrote episodes of HBO’s 1998 miniseries From the Earth To the Moon.

Reinert is survived by his wife, actress Lisa Hart Carroll, best known for her role as Patsy in Terms of Endearment.

Jinnistan wrote:Check out some of Super Dave's appearances on Letterman. He has one the meanest dead-pan's in the business

Put to especially brilliant use in Brooks' Modern Romance. "I misjudged you. I'm not perfect. Buy the box. You'll like it."
Top

The guy with the eyepatch from Dr. Hook died.

Actress Verna Bloom at the age of 80 from complications of dementia.


Bloom had been appearing in films as early as 1969 in Medium Cool. Her more well known roles were as Sarah in High Plains Drifter, Marion Wormer in Animal House and The Last Temptation of Christ as Mary, mother of Jesus.


She also appeared in various television shows throughout her career including The West Wing, The Equalizer, and Lou Grant.


Bloom was married to critic and screenwriter Jay Cocks from 1972 until she died.

"You still wanna show me your cucumber?"
Ain't no grave gonna hold this body down

Shit. Maybe I'll finally get around to As I Was Moving Ahead Occasionally I Saw Brief Glimpses of Beauty (it feels like I've had it on my computer for almost 97 years).
Ma`crol´o`gy
n. 1. Long and tedious talk without much substance; superfluity of words.
Top

Macrology wrote:Shit. Maybe I'll finally get around to As I Was Moving Ahead Occasionally I Saw Brief Glimpses of Beauty (it feels like I've had it on my computer for almost 97 years).

I found it very wholesome, just a tight, warm hug of a movie.
Top

A tight, warm, five hour hug of a movie.

I will try to watch it soon.
Ma`crol´o`gy
n. 1. Long and tedious talk without much substance; superfluity of words.
Top

it is broken up into 12 chapters but I dunno if you're someone who would rather watch it all in one go (for the full effect).
Top

Yeah, I'm that kind of asshole.

I may break it up into two nights. We'll see. But five hours isn't so bad. I did Sátántangó all in one go.
Ma`crol´o`gy
n. 1. Long and tedious talk without much substance; superfluity of words.
Top


Aw, man... one of the best character actors ever.


"Just what you see, pal."
Ain't no grave gonna hold this body down 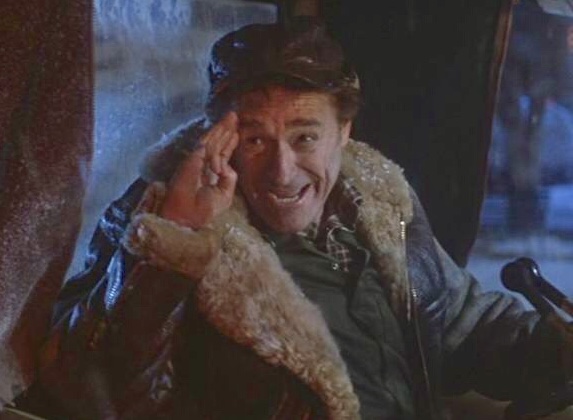 He never did get that Zenith.
Top

"That’s where I met what’s-his-name, who makes the wine. Coppola."
Top

That's hilarious. Everyone's trying to stay in character and they're probably on a tight schedule. Seems more like they were just busting each other's balls than genuine dislike.
Top

Actress Julie Adams has died at the age of 92.