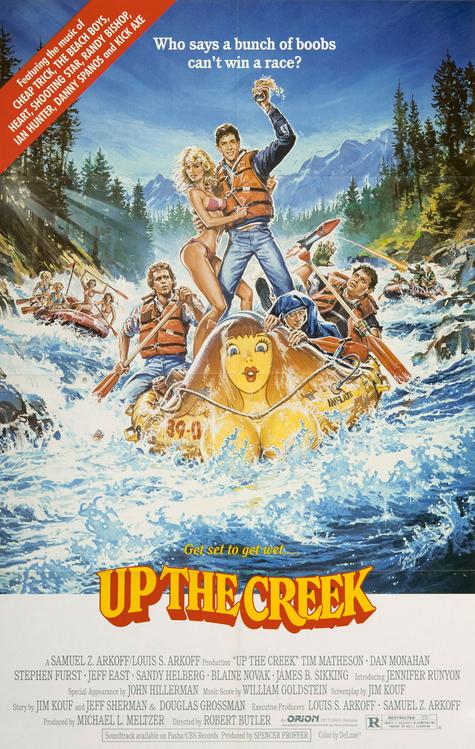 This is a diverting little romp from my youth that I decided to revisit. It was also a favorite of MASSIVEminiature's so this is another one for him.
I must say, it really helps when your expectations are low going into movies. This is the kind of thing I could see someone thinking absolutely sucked if they went in with the wrong expectations or having a good time with if they had the right ones. I ended up being in the latter camp, which is nice because I absolutely loved this movie when I was young, watched it at least a dozen times, new almost every line of the movie, and really, really wanted to be Bob McGraw (Tim Matheson). I mean, what better role-model for a 13 year-old?
Basically, they tried to make a somewhat less raunchy, 80s, Animal House-on-water, going back to the Tim Matheson well to propel it. Matheson is up to the task. Whether the script is or not, I'd say is up to the individual viewer.
The story is that the worst-ranked university in America decides to send its four worst students to compete in an annual collegiate raft race under the "Win and you graduate, lose and you're expelled" ultimatum. So the four misfits, comprising the aforementioned Matheson, Pee-Wee from Porky's, Harold from Midnight Madness (which you need to see if you haven't), and Officer Clark from The Hollywood Knights... 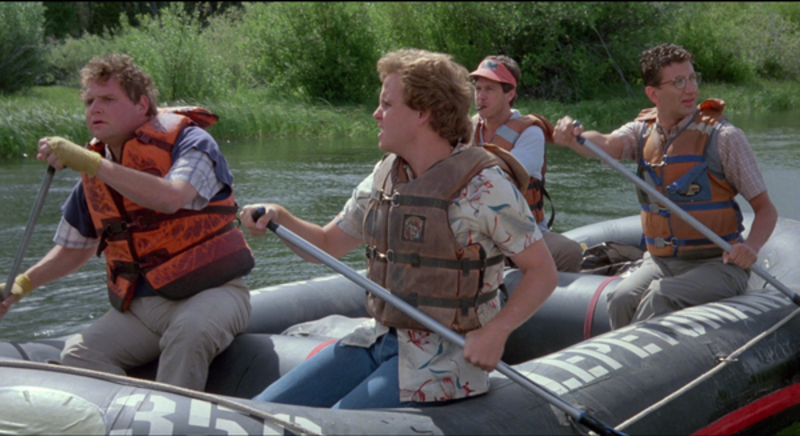 ...bond on a road-trip to the event and take on a bunch of unscrupulous Chads and carefree Karens for aquatic glory.
I am always amused at how well they always cast Chads in 80s movies. I mean, I can't imagine "Rex" ever being cast as anything but a Chad. And this movie has a veritable army of Chads. On the other hand, the Karens in this movie are actually decent people. Sure they're ultra-privileged white chicks, but they don't do any harm and their leader, the uniquely attractive "Heather Merriwether" played by Jennifer Runyon, is a sharp and plucky young woman. The portrayal of the Ivy League rich kids in this really amuses me though as they have river-side hot-tubs and champagne and shit in the middle of a raft-race. I loved the 80s.
There's some other silliness about the ROTC team that has also entered the race but that's almost filler and is pretty dumb. Not enough to ruin the movie but certainly a less than welcome distraction most of the time.
Ultimately, the movie mostly just rides Matheson's charm and he is up to the task giving a very Otter-esque yet thoroughly enjoyable run-through as a somehow debonair fuck-off.
Up The Creek is decent enough fun as a light diversion and is the third back-to-obscure-80s-high-school-college-romps that have actually not disappointed me in this thread, a run of luck that has to end some time.
Top 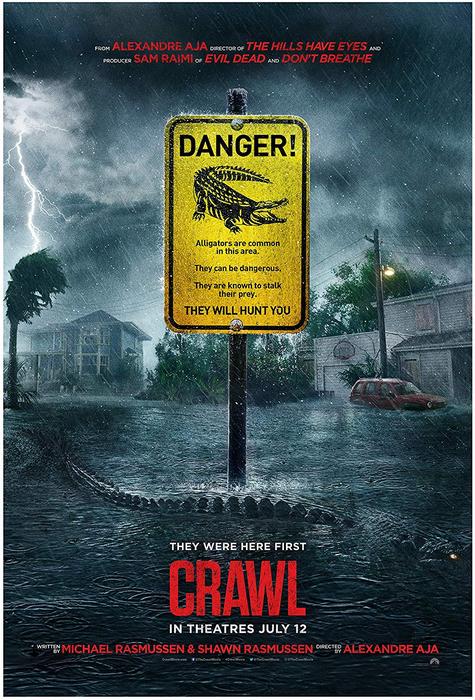 Nope.
The hype train can just jump right off the motherfucking tracks on this one right now. I looked at lists calling this the 2nd or 3rd-best alligator horror movie ever made, and there are some out there. That is complete fucking horseshit. I could not imagine that a movie about alligators attacking could actually piss me off, but this one found a way, no about 2 dozen ways.
The biggest problem, honestly, is tone. There's an astonishing failure of tonal balance here with the movie seemingly taking itself very seriously in terms of the way that it's filmed for one thing, very serious, very realistic except when it's evoking certain moments to develop character and relationship, but more importantly character development and themes of family estrangement and father-daughter relationships and those weird dad-coaches that ruin their kids' lives and then putting that in the context of one of the silliest, most logic-defying B-movies I've seen in years.
You simply cannot ground a film in a tense, thoughtful, and genuinely melancholy reality and then devolve into shlock while maintaining that grounding despite anything that actually happens in the movie. It's not jarring but it's also not clever or creative, it does not work and it's bad, very amateurish filmmaking. I'm shocked to see that Aja made this because I've never seen him be so fucking off the mark. For anyone to decry Haute Tension and celebrate this film is inconceivable to me. And how does a guy who nails the very same tonal balance of horror-tension in a real world with B-movie silliness in Piranha 3D shit the very same bed so badly here?
I know that I cannot say this without then explaining the other side, what is so schlocky about it, so here's that presentation:
Logistically the movie makes almost no sense. The alligators can see great in the light but even better in the dark, the movie points out, and they live mostly underwater in this, yet they not only don't seem to be able to see the main characters swimming around but they can’t even see the flashlight swimming around a few feet from them? Yet they track other characters underwater from 100 feet away like they have built in homing devices. There are two small areas of the crawl-space that the movie deems "safe" early on, yet both characters abandon those spaces almost immediately, but are not attacked somehow, when these gators were covering every inch of the place just minutes before. For large portions of the movie the gators are somewhere under the water unseen, in THEIR environment, yet these characters move around almost freely except when the plot dictates that they not? Gators chase them on land for the first period of the movie, yet suddenly stop at the edge of the water later when that is the only way the main character can survive? A boat that is destroyed Jaws-style earlier in the movie now works just fine for an escape plan that then fails just seconds later? The main character walks barefoot across broken glass and they even kinda close-up on her feet grinding on the glass and do sound effects no less, yet she is totally unaffected by this and doesn’t spill a drop of blood or have any issues?
And talk about bad logic in character reasoning, like historic horror-movie-terrible-decision making, you have the option of just going up to the second floor or attic of the house you’re already in and waiting out the gators/storm, but instead you decide to cross like a couple hundred feet of gator-infested water? The dad, who had to do some horrifying painful splinting of his knee with a belt and wrench earlier is now gonna carry the dog across 200 feet of chest-high water? The cops step in the water for 20 seconds and are swarmed immediately by five gators but the main characters just walk and swim all around and don't get caught or seen, but then will suddenly get their asses bit outta nowhere on the second floor? And then some of the moments where she outswims the gators are obviously just ludicrous. If this wasn't looking so hard like it was trying to be grounded in the real world, eh, maybe you could let this slide but jesus. There are some other moments that really didn’t work either. And, come on, getting one’s arm bitten off without immediate trauma attention is uniformly fatal in a matter of probably less than a minute, but we just tie it off with yet another belt (where does this guy get all these belts?) and he’s fully conscious and able to walk/run/swim? Maybe my favorite one, how about them showing a gator burst through a fucking wall earlier in the movie, but it is held off and then captured by a sliding-glass shower-door like now it's stuck in an aquarium? Made even more absurd by, just a minute or two later, a comparably-sized gator bursting through the fucking second-story window with its wood slats and all? Mother of god.
I mean, this is like Sharknado level shit, except again, the movie seems to take itself so seriously that it's just grating every time this shit happens and it piles up minute by minute. Maybe somehow all this ludicrosity works as a silly farce but not with this serious, melancholy tone that's been set up.
This movie is just fucking ridiculous, I really don’t see how this has been taken as anything other like Mystery Science Theater movie. Lake Placid is a far better movie, period, and it's not like that's a great movie.

Edit: One other beef. People can say, "Oh, it's better that they don't explain it", but that's bullshit in this case. Why the fuck are all these alligators so astonishingly aggressive all of a sudden? Is there a moment I missed where somebody says, "Hurricanes make alligators astonishingly aggressive where they not only kill anything in their territory, they actively and aggressively hunt anything moving, both alone and in packs?" Cause I missed that part.
And what was with the fucking eggs? Was there any point to that?
Fuck.
Top

Oh, I forgot to mention the two aspects of the film I did like, the acting by Kaya Scodelario and Barry Pepper (I thought he was dead!), and the fact that
the dog didn't get eaten
. That was a refreshing break from expectations.
Top

I'd rather just re-watch Lake Placid.
Ain't no grave gonna hold this body down

I think that's what I'm gonna do.
Top

Oh man, I had hopes for that one. I had read good stuff about it.
--- UNDER CONSTRUCTION ---
Top

Me too. I was kinda shocked and really disappointed. Maybe your mileage will vary.
Top
Post Reply
258 posts