Thief's Journey into the Musical Unknown

Jinnistan wrote: I'm glad that you got something out of it. I don't think there's actually that much electronics here (especially compared to Kraftwerk, Tangerine Dream, Kluster, etc from the same "kraut-rock" scene), but it follows a similar formula - hypnotically repetitive patterns - as later electronic dance music.

Speaking of Negativland, it inspired the name of a later group of audio-anarchists who had famously gotten a song into legal trouble for combining samples of U2 mixed with some hot-tempered Casey Kasem outtakes.

Yeah, I really shouldn't have written "electronics". What I meant was "ambient" sounds and the likes.

I'll check out that group later. Thanks!
--- UNDER CONSTRUCTION ---
Top

Thief wrote:
This was a fun listen. I like rap, but is not my forte. Still, I enjoyed the throwback to those 90s years. The lyrics were solid, even if I couldn't catch all of them, but I liked how they used their rhymes. I wasn't blown away, but I dug it.

I don't have an encyclopedic knowledge of "gangsta rap", but according to Wikipedia the first big hit album in the style was in 1988. The Notorious B.I.G. put out his first album in 1984. Before that happened, and the biggest incident in the whole east coast/west coast gangsta rap violence nonsense happened this album came out both satirizing and giving heft to the reality of what those others were glamorizing: killing random people, getting caught up in the violence yourself, getting thrown in jail - even HIV from (failed safe) sex - and that's all in one song.

It's a reminder that the period wasn't all anti-intellectual machismo and materialistic glorification of violence - there were people seeing the illusions of that world for what it was, telling intricate stories, and delivering it all with humor and putting it into a rhyme scheme. At the same time, they understood the temptations. That time wasn't the dark ages - but the bright lights didn't always sell. Unfortunately. The album also one of my favorite hip hop albums to listen to, lyrics aside - but part of that is because I don't cringe at the lyrics.

"Tell Me Who Profits"

Dough?
The education will get you further
than murder and drugs, with thugs
you're better off being a nerd.

That's absurd
life don't mean nuthin' without phat pockets
that's the only way to get paid
you tell me who profits.
LEAVES come from TREES
Retired
Top 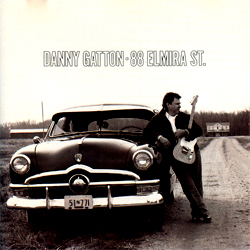 This one is for you Thief. Danny Gatton was an incredible guitarist and this album displays it with elements of jazz, country, rockabilly, and blues. This is from '91 and consider it his best work. Sadly he took his own life three years later.

This one is for you Thief. Danny Gatton was an incredible guitarist and this album displays it with elements of jazz, country, rockabilly, and blues. This is from '91 and consider it his best work. Sadly he took his own life three years later.

I haven't jumped back into this, but I swear I will. In the meantime, here's another recommendation from me to you.

I think the first time I heard this band was during an episode of Dawson's Creek back in the late 90's or early 00's. The song was either "Freak of the Week" or "Sugarbuzz" and I liked it so much that I went on the Internet to look them up. I listened to all their music and loved it. Hailing from Atlanta and fronted by Butch Walker, the trio got some airplay with some of the songs from their second album, Hey!Album. After a third album (ReadySexGo), the band had a bitter breakup with Elektra and decided to part ways as a band altogether. I decided to include both albums because they are quite similar and I think they play well off each other. Walker's vocals are pretty good, the music is catchy, and the lyrics are witty. If any of you like it, check out some of Walker's solo albums as well, especially his first one (Left of Self-Centered), which also has some pretty good songs.

My apologies for leaving this unattended. During the last months, I've been listening more to film podcasts instead of music, so this project kinda fell in the backseat. But I'm picking it up so expect more feedback on your recommendations.
--- UNDER CONSTRUCTION ---
Top

The Nameless One wrote: The Mae-Shi: HLLLYH (standout track: Run to your Grave)


I listened to this one during my morning walk and I really enjoyed it. I got a lot of vibes from it; some songs reminded me of MGMT or Flaming Lips, others had a more 70's vibe to them, and there was one that even reminded me of They Might Be Giants. Good instrumentation, but I mostly liked the way the drums sounded. Very energetic music.

I'm not sure if I got the titles right, but I think it was "The Melody" or "Leech and Locust", the one that I kinda liked more. My least favorite? Probably "Kingdom Come". Not that it was bad, but I felt it was the one that relied mostly on electronic sound.
--- UNDER CONSTRUCTION ---
Top

Didn't want to clutter Stu's thread with this.

If a Troll Army ever invades my neighborhood I'd expect it to sound something like this.
I once heard this described as "If Zappa composed Klingon military marches" and that's accurate enough.
Captain's Log
Top


Didn't want to clutter Stu's thread with this.

If a Troll Army ever invades my neighborhood I'd expect it to sound something like this.
I once heard this described as "If Zappa composed Klingon military marches" and that's accurate enough.

Wow, this was certainly an interesting listen. I went back and listened to that whole album between yesterday and this morning and it was... something. True to the 70's, there's a lot of "trippiness" to their music, but there's also an inherent eerieness to the vocals and how it all plays. I also enjoyed the jazzy feel of the music. I'm not sure it's something I will listen to frequently, but like I said, it was really interesting and unique. I think the song you posted, "Mëkanïk Kömmandöh", is probably the most colorful and fun to listen to. Thanks for sharing.

Also, thanks for resuscitating this thread and reminding me of the albums I never got around to. Let's hope I can get to it all.
--- UNDER CONSTRUCTION ---
Top

Glad to hear it, because I was going to add that this particular track works best in context, but I didn't expect anyone to commit to the whole thing.
As for the Jazzy nature of it, the band's leader (and drummer) often cites John Coltrane as his biggest influence. Glad you enjoyed it, and believe me this isn't daily listening for me either. Maybe once a year I'll binge my Magma albums all at once.